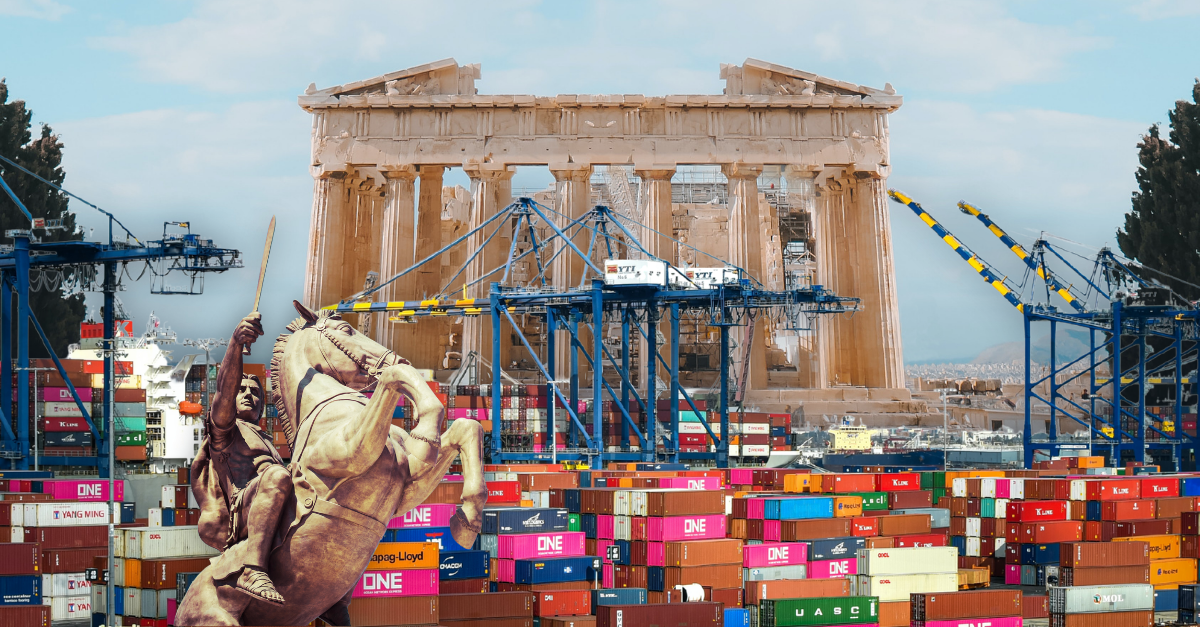 The Friday Five: A hot take on logistics from Alexander the Great

“My logisticians are a humorless lot…they know if my campaign fails, they are the first ones I will slay.” – Alexander the Great

Logisticians have long paid the price when things don’t go as planned. Hopefully not as dire as in Alexander’s days, but times are certainly tough for logistics providers, and they don’t seem to be letting up. This week’s Friday Five covers ongoing challenges in ocean freight and LTL, importers moving to air freight, and a peak into the “sausage wars” firing up in the EU and UK.

No other way to say it, it’s been a rough year. Especially painful if you are in the customer service department of an ocean carrier. Recent Sea-Intelligence reliability data showed on-time dropped to 28.8% in May 2021 from a staggering 74.8% in May 2020.

Many factors are getting blamed for the ocean freight disruption. Depending on which part of the logistics equation you happen to be sitting, the view, and earnings, can be quite different. For carriers, even though they are experiencing abysmal reliability scores, their financials have never been brighter which can alleviate some of the customer dissatisfaction sting.

Bjorn Vang Jensen, VP of Advisory Services at Sea-Intelligence called the current market a “stress test from hell” in a recent opinion piece. He cited the increasing ocean shipping costs to be a result of high demand and doesn’t seem it slowing down. He said if "demand patterns and volumes don’t shift, and there’s a chance they won’t, then shipping capacity could remain dried up for up to 3 years (the time it takes to build a fleet of new ships for a string), and freight rates more than likely remain sky-high.”

NRF Vice President for Supply Chain and Customs Policy, Jonathan Gold brought up several factors earlier this month “There’s no shortage of demand from consumers, but there continue to be shortages of labor, equipment and shipping capacity to meet that demand." The NRF executive stated the increase in vaccination rates are driving shoppers back into the stores putting added pressure on retail supply chains. Gold believes the rising shipping costs and port congestion will continue to be a challenge through the end of the year.

Hapag-Lloyd CEO, Rolf Jansen, explained that congestion continues to be a big problem globally, "If we look at [the] situation around the market, then the theme remains congestion." Similar to Gold, Jansen believes the high demand will continue through the holiday season.

For logistics providers, juggling capacity constraints and soaring prices compounds the existing problem of receiving messy and unstructured data from carriers and having to manually enter it into systems to gain insights that will optimize their business operations. For LSPs to flourish, they need a new way of solving the same old problems in their industry so they can accurately and quickly match supply and demand needs in booking and allocation.

Not to be left out, LTL gets a seat at the tight capacity table [JOC]

Despite having record breaking quarterly revenue, FedEx Freight is indicating that the LTL market will only get tighter. Along with their competitors, FedEx Freight is feeling the capacity pinch as online shopping continues at a rapid pace. They are using “targeted volume controls” to keep the surge of freight from overwhelming their network and claimed their competitor are also taking similar measures.

The Adobe Analytics claimed in its February 2021 Digital Economy Index that US Consumers spent $844 billion online from March 2020 through Feb 2021. The recent e-commerce surge increased spend by an unexpected $183 billion which is the equivalent of a second holiday online season. (Between November and December last year, US Consumers spent $188 billion.)

The spot market for moving containers to Europe increased 7.9% to US$6,355 per TEU. This registers a week-on-week increase for the 10th consecutive week as reported from JIFFA. Not to be outdone, containers to the Mediterranean came in at US$6,272 per TEU which is an uptick of 5.4% and a steady increase for 11 straight weeks. Spot rates to North America East Coast ports had a slight rise to 0.9% which equates to US$8,554 per FEU. In more upbeat news, rates to the West Coast fell 3.5% coming in at $4,658 per FEU. Practically a bargain!

We don’t know when the ocean shipping rates will stabilize but we do know that LSPs can optimize their operations right now through more efficient management of their carrier booking processes and by gaining insight into performance metrics.
‍

Although costly, manufacturers are moving to air freight in hopes to secure future sales and preserve shelf space at retailers [JOC]

Switching from ocean freight to air freight increases the likelihood of on-time arrival of your shipments, but at what cost? A June analysis from SEKO showed that even with the exploding ocean rates coming out of mainland China, air freight can still cost customers 3X more to ship certain products. Yet, many manufacturers are forced to go down this path to keep products on shelves at retailers in the competitive retail space market. If manufacturers cannot fulfill their shelf space contracts, they risk losing valuable retail space to competitors.

Ocean carriers are luring shippers to sign up for contracts as a hedge against the unpredictable spot market. However, some manufacturers are betting they can secure better long-term pricing if they wait. The question is, how long can they wait?

Until yesterday, I was unaware of the “sausage war.” Full stop. But it’s a thing. A real thing. And it is another unintended consequence of Brexit and how it is impacting the supply chain process for how and what goods can be shipped between the UK and EU.

The “sausage war” involves said item and mince being shipped to Northern Ireland from the UK without following the Irish protocol in the withdrawal agreement. As a result of Brexit, goods shipped between UK and Northern Ireland must follow EU laws which state “under EU rules, chilled meats, including “meat preparations” such as sausages, have to be sent frozen into the bloc from a non-EU country with which it does not have an all-encompassing veterinary agreement.”

Things will no doubt get spicier after the three-month grace period as the EU is looking for UK to live up to the agreement that Boris Johnson signed in 2019, that stated all goods traveling to Northern Ireland from Great Britain would have to follow EU rules, and the UK is looking to use the time to renegotiate.

In the words of Otto von Bismark, “ Laws are like sausages, it is better not to see them being made.”

‍
To learn more how Logistics Orchestration from Slync.io can help you navigate the complexities of global logistics, request a demo.

And don’t forget to check out last week’s news and come back for our next logistics news roundup!