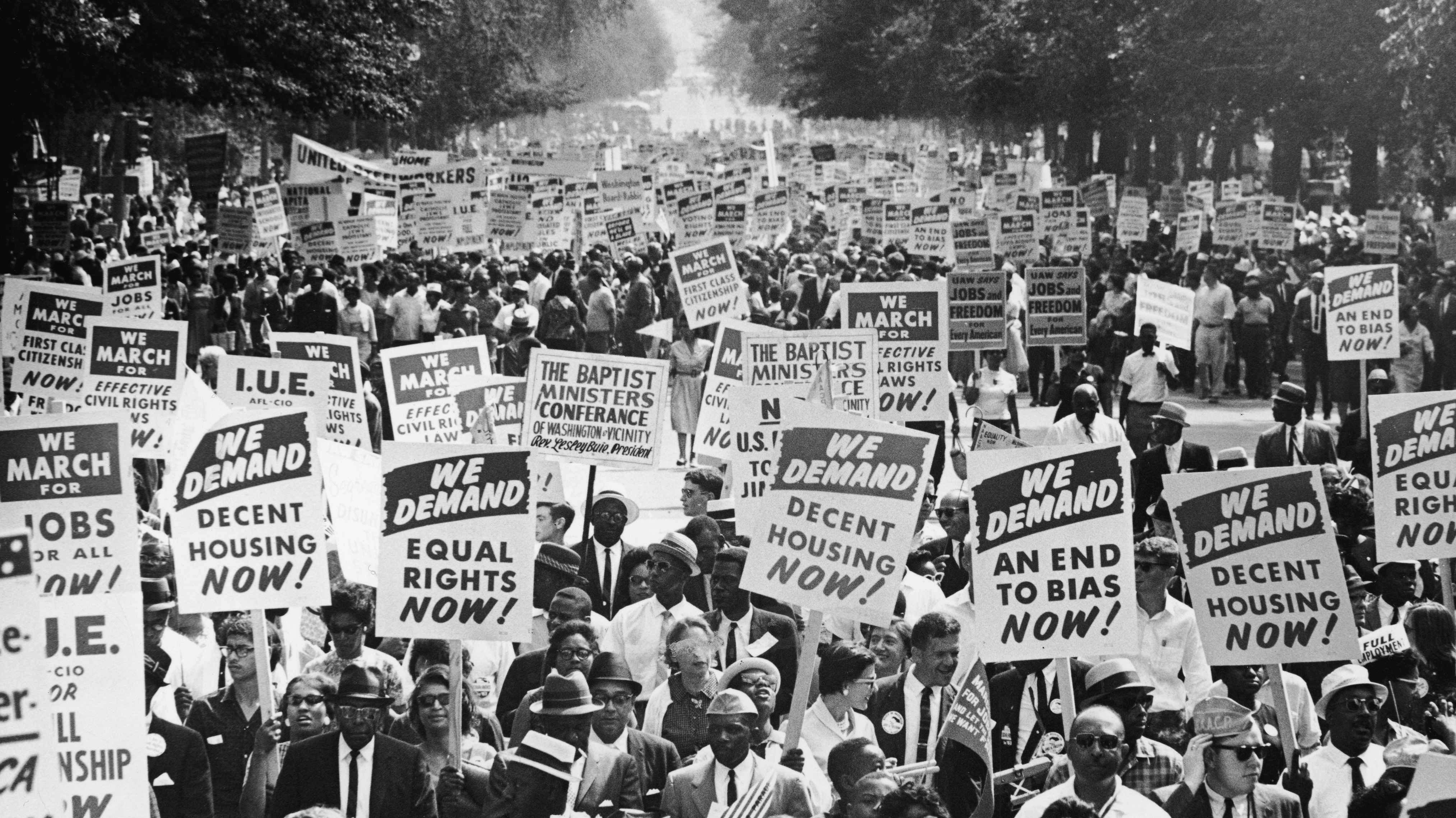 Today, we are doing a special Friday Five edition. We just didn’t feel right writing about anything else.

Civil rights are guarantees of equal social opportunities and equal protection under the law, regardless of race, religion, or other personal characteristics. Often, civil rights tend to increase as governments feel pressure, either from national movements or other countries, to enact change. Unlike other rights concepts, such as inherent human rights or natural rights, civil rights must be given and guaranteed by the power of the state and federal government.

Here are 5 civil rights milestones that helped shape the American constitution and the amendments that defend them still today.

More than two and a half years after Abraham Lincoln had given his Emancipation Proclamation address, which is popularly thought of as "the end of slavery," there were still an estimated 250,000 people enslaved in the state of Texas alone. Eager to escape fighting from the ongoing civil war, Planters and slaveholders fled from the eastern states to the geographically isolated state of Texas, bringing thousands of enslaved people with them as they attempted to elude the end of the Civil War.

While technically, from the Union's perspective, the 250,000 enslaved people were already considered free — none of them were formerly made aware of it until June 19, 1865. This day is now better known as Juneteenth, the day when General Gordon Granger rode into Galveston, Texas, and announced all enslaved people were now free.

He read aloud General Order No. 3, stating: "The people of Texas are informed that, in accordance with a proclamation from the Executive of the United States, all slaves are free. This involves an absolute equality of personal rights and rights of property between former masters and slaves, and the connection heretofore existing between them becomes that between employer and hired labor.”

But, despite the sentiment, he continued on to encourage them to stay with their captors. “The freedmen are advised to remain quietly at their present homes and work for wages. They are informed that they will not be allowed to collect at military posts and that they will not be supported in idleness either there or elsewhere." Texas is a large state and the troops needed to enforce the news were slow to spread. Many enslavers deliberately suppressed the information until after the harvest, and some two more years beyond that.

It wasn’t until the passage of the 13th Amendment to the American constitution, that slavery and involuntary servitude, except as punishment for a crime was abolished. It was approved by the 38th Congress in 1864 but the amendment wasn’t ratified by the required number of states until December 6, 1865. Having been approved by 27 of the 36 states, including those that had been in rebellion on December 18, 1865, Secretary of State William H. Seward officially certified that the 13th Amendment had become valid, to all intents and purposes, as a part of the Constitution.

Now, the 13th Amendment also enables Congress to pass laws against sex trafficking and other modern forms of slavery.

This was the first of the three Reconstruction Amendments adopted following the American Civil War. The 13th Amendment applies to the actions of private citizens, while the 14th and 15th Amendments apply only to state actors.

The passage of the 14th Amendment guaranteed the basic civil rights of all citizens, equal protection under the law regardless of color. It declared that all persons born or naturalized in the U.S. were citizens. It also declared that any state that denied or abridged the voting rights of males over the age of 21 would be subject to proportional reductions in its representation in the U.S. House of Representatives. The amendment was approved by the 39th Congress (1865–1867) as H.J. Res. 127 and ratified by the states on July 9, 1868.

The Act would meet great resistance from the racist Klu Klux Klan and would further require the passing of an additional act to enforce. Formerly called the “Third Ku Klux Klan Act” it was passed along with the Civil Rights Act of 1871, and guarantees all citizens of the United States the rights afforded by the Constitution and provided legal protection under the law. It was passed by the 42nd Congress (1871–1873) as H.R. 320.

When the 15th Amendment was passed in 1870, it prohibited discrimination in voting on account of race. It also forbade any state to deprive a citizen of his vote because of race, color, or previous condition of servitude. It was approved by the 40th Congress (1867–1869) as S.J. Res. 8; and officially ratified by the states on February 3, 1870.

With it quickly followed the Civil Rights Act of 1870, which prohibited discrimination in voter registration on the basis of race, color, or previous condition of servitude. The Act established penalties for interfering with a person’s right to vote, gave federal courts the power to enforce the act, and to employ the use of federal marshals and the army to uphold it.

However, that wasn’t enough to uphold the amendment and the Civil Rights Act of 1871 proved necessary next, placing all elections in both the North and South under federal control. This Act allowed for the appointment of election supervisors by federal circuit judges, and authorized U.S. Marshals to employ deputies to maintain order at polling places. They were both passed by the 41st Congress (1869–1871) as H.R. 1293 and 2634 respectively.

The Civil Rights Act of 1875 was needed within 4 years of that amendment to bar discrimination in public accommodations and on public conveyances on land and water. The passing of this act also prohibited the exclusion of African Americans from jury duty, further supporting the right to a fair trial. It was passed by the 43rd Congress (1873–1875) as H.R. 796.

It would take over 80 long, hard years for any new, positive civil rights legislation to be passed that actually reinforced everyone’s right to civil rights. With the passing of the Civil Rights Act of 1957, a six-member Commission on Civil Rights was finally created and the Civil Rights Division in the U.S. Department of Justice was formally established. This act authorized the U.S. Attorney General to seek court injunctions against deprivation and obstruction of voting rights by state officials.

The Civil Rights Act of 1960 expanded the enforcement powers of 1957 and introduced criminal penalties for obstructing the implementation of federal court orders. The Civil Rights Commission was extended and required that voting and registration records for federal elections be preserved. It was passed by the 86th Congress (1959–1961) as H.R. 8601.

Culminating together with progress and protests, the Civil Rights Act of 1964 included substantially more substance than the two prior.  It prohibited discrimination in public accommodations, facilities, and schools including restaurants, hotels and motels — ending the era of legal segregation in those places. It outlawed discrimination in federally funded projects. It created the Equal Employment Opportunity Commission to monitor employment discrimination in the public and private sectors which we know and love today. It provided additional capacities to enforce voting rights and extended the Civil Rights Commission for four more years. It was passed by the 88th Congress (1963–1965) as H.R. 7152.

Fair Housing was crucial and targeted next. The Civil Rights Act of 1968 would go on to be known as the Fair Housing Act. The legislation prohibited discrimination in the sale or rental of approximately 80 percent of the housing in the U.S.. It also prohibited state governments and Native-American tribal governments from violating the constitutional rights of Native Americans. It was passed by the 90th Congress (1967–1969) as H.R. 2516 and was amended by the 100th congress in 1988 to strengthen the powers of enforcement granted to the Housing and Urban Development Department in the original Act.
‍

The Voting Rights Act of 1965 suspended the unfair use of literacy tests and voter disqualification devices for five years initially. It also authorized the use of federal examiners to supervise voter registration in states that used tests or in which less than half the voting-eligible residents registered or voted. It directed the U.S. Attorney General to institute proceedings against use of poll taxes and provided criminal penalties for individuals who violated the act. It was passed by the 89th Congress (1965-1967) as S. 1564.

Amendments to the act in 1970, made it applicable to areas where less than 50 percent of the eligible voting age population. With the 1975 Voting Rights Act extended the provisions and established coverage for other minority groups including Native Americans, Hispanic Americans, and Asian Americans. It also permanently banned literacy tests.

Next, the Voting Right Act of 1982 extended the provisions for another 25 more years and provided aid and instruction to disabled or illiterate voters, and bilingual election materials in jurisdictions with large minority populations. It also allowed jurisdictions that could provide evidence of maintaining a clean voting rights record for at least 10 years, to avoid pre-clearance coverage (the requirement of federal approval of any change to local or state voting laws). It was effectively passed by the 97th Congress (1981–1983) as H.R. 3112.

The last of the civil rights Acts was passed in 2006 and brought the latest extension of Voting Rights through to August of 2032.

Knowledge is power. Thanks for educating yourself on these very important issues of civil rights! Don’t forget to check out last week’s logistics news. And be sure to come back next week for our next Friday Five roundup!