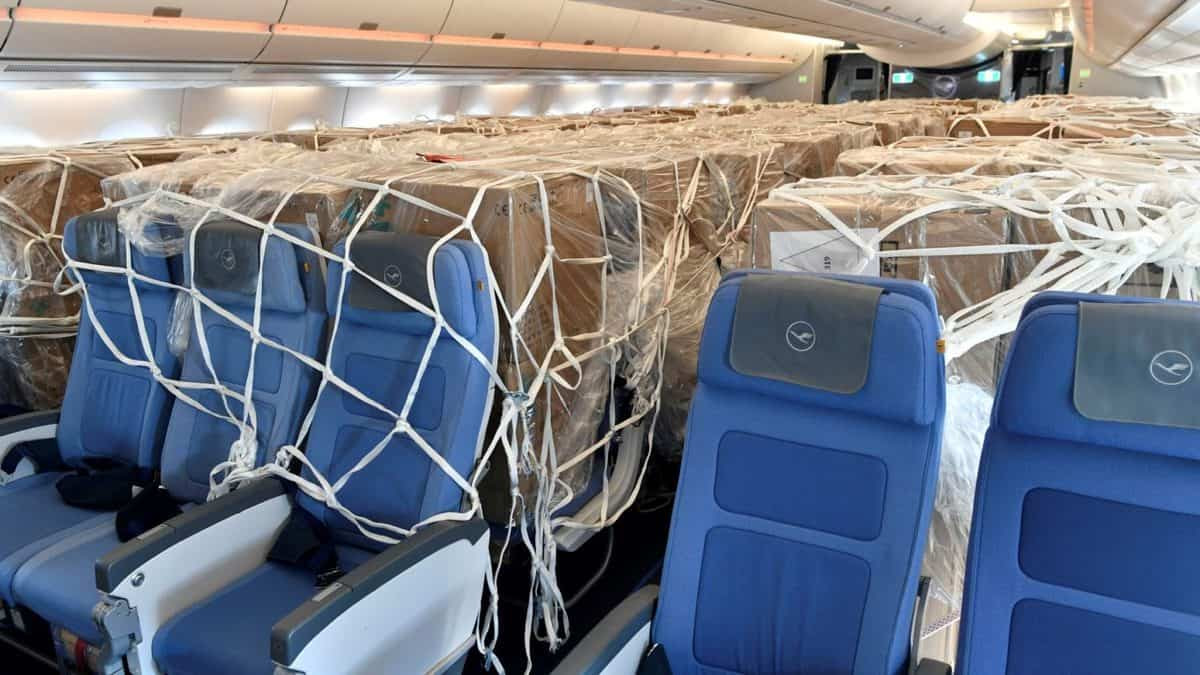 The Friday Five: FAA tells air cargo to buckle up

According to the FAA, this decision was justified to ensure critical shipments for the coronavirus response are not delayed. Industry officials say using the seats adds about 30% more volumetric capacity, and six to seven extra tons, for cargo flights compared with just the lower hold. The FAA has yet to rule on a separate A4A petition for permission to remove seats from passenger aircraft and load cargo on the floor.

The FAA’s latest exemption comes with several conditions, including a weight limit of 50 pounds per seat and 20 pounds per space under a seat, extra fire extinguishers and at least two crew members riding in the cabin to detect any potential fire, and an empty row in twin-aisle planes to allow access to both sides.

More than 150 airlines around the world are using “ghost” freighters — no passengers, just cargo — in some form, according to industry experts.
‍

Amazon's Prime Day will be in September rather than July as strains on the company’s warehouses due to surging demand have caused Amazon to postpone the two-day online shopping event.

While company revenues in the first quarter were bolstered by demand from surging orders, higher costs due to a wave of hiring, hazard pay and shipping costs crimped profits. Amazon’s net income fell 29% from the year-earlier period and the company missed its earnings targets.

Walmart Inc., by contrast, posted a 4% increase in earnings while experiencing a 74% increase in online shopping for the quarter. One advantage for Walmart is that its stores offer curbside pickup for online orders, a more inexpensive form of fulfillment compared to some Amazon shipments.
‍

Nine carriers in the Digital Container Shipping Association (DCSA) say eliminating paper from transactions will improve all aspects of the process.

In January DCSA released its first set of open standards, guidelines on processes, data and interface standards for tracking and tracing ocean containers. In March it issued a guide designed to facilitate vessel readiness to comply with the International Maritime Organization Resolution MSC.428(98) on Maritime Cyber Risk Management in Safety Management Systems.

Digital standards will enable interoperability between all stakeholders, such as system providers, shippers, carriers, banks and regulators.
‍

FedEx is partnering with Microsoft to give commercial shippers early warning of delays due to issues such as weather and traffic, while UPS is working on drone delivery and has widened its My Choice program for scheduling deliveries while Amazon and Walmart have collectively hired nearly 500,000 employees to meet the growing needs of e-commerce fulfillment, notably in the warehouse and on the road.
‍

Victoria's Secret is closing a quarter of its stores [CNN]

Of the approximately 1,100 Victoria's Secret locations in North America, parent company L Brands (LB), said the mall-staple would close 250 stores as it warned it could close more stores over the next few years.

L Brands also said it was closing 50 Bath & Body Works stores, out of the 1700 North American stores mostly in mall locations where it doesn't expect foot traffic to regain pre-pandemic normalcy. Despite the store closures, Bath & Body Works had a strong quarter with online sales growing 85% YOY. In light of COVID-19, the brand expects its sanitizer products to grow into a $300 million business this year — up from $100 million last year.

Thanks for reading! Stay healthy, stay safe. Don’t forget to check out last week’s news. Come back next week for our next Friday Five roundup!