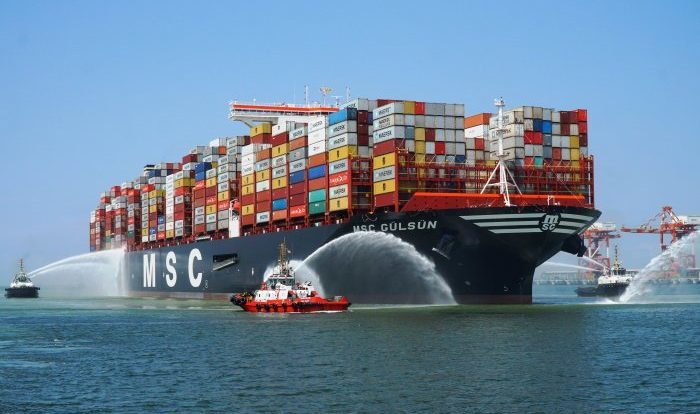 The Friday Five: MSC tipped to overtake Maersk as #1

For the last 25 years, Maersk has held the rank of the world’s largest container line. According to new reports, that could soon change.  On Sunday, analysts at Copenhagen-based Sea-Intelligence suggested that MSC might soon overtake Maersk as the world’s largest carrier.

There is now just a 0.9% difference between the two 2M Alliance companies. MSC gained the number 2 spot as the world’s second-largest carrier back in 2004.

“In absolute terms, it also means that if MSC goes ahead and orders just a single new series of ultra-large vessels for the Asia-Europe trade, and Maersk continues their current strategy of not ordering more large tonnage, then we will see MSC overtake Maersk on fleet size,” Sea-Intelligence noted.

Over the past few weeks, MSC has been extraordinarily active in adding secondhand tonnage to its fleet, and if all the deals complete, MSC’s owned fleet will reach 204 ships.

The carriers are finding spurious reasons to refuse the release of equipment at depots in China, in addition to rolling contracted containers without notice.

Annual contracts on the transpacific are usually negotiated through February and March. Shipping consultant Drewry said it expected early deals for 2021 to be over 40% higher than 2020. It is definitely a sellers’ market.

Even the biggest BCOs are having trouble getting equipment and space after they have exceeded their MQCs [minimum quantity commitments]. Many are turning to NVOCCs for help in getting their products shipped.

In fact, October volumes showed that the NVOCC market share had grown to 47.5%.
‍

The report found one of the primary drivers behind the resurgence in freight activity: healthy consumer spending and a hot maritime import sector.

On Wednesday, The Port of Los Angeles said that October marked the busiest month in the facility’s 114-year history. Propelled by replenishment of inventories and retailers preparing for upcoming holidays, the port processed 980,729 twenty-foot equivalent units (TEUs) for the month, an increase of 27.3% compared to October 2019.

Avoiding East Coast and Gulf Coast ports because of longer ocean transit times from Asia, there has been a double-digital percentage jump in the number of containers arriving at U.S. West Coast ports, Cass confirmed.
‍

On Monday, Pacific International Lines (PIL) told the Singapore Exchange it would not pay back $44.6 million of notes due.

Last week, PIL applied for a Singaporean form of bankruptcy protection with a local court. Over the past two years, the world’s 12th largest liner has suffered net losses in excess of $1 Billion.

Despite the missed note payment, the company assures that a $600m bailout from Heliconia Capital Management is still on track.
‍

On Thursday, the United States’ largest automaker by sales, General Motors, announced plans to raise its spending on research into electric and driverless vehicles by about a third, to $27 billion through 2025.

Electric vehicles today account for only about 2% of global sales for GM and the broader industry. However, tighter regulations on tailpipe emissions in Europe and China also are pressuring automakers to offer greener vehicle lineups.

GM says it has the scale in areas like manufacturing and sales to eventually overtake Tesla as the leader in electric-vehicle sales in North America. By mid-decade, GM expects that 40% of the vehicles it sells in the U.S. will be fully electric.