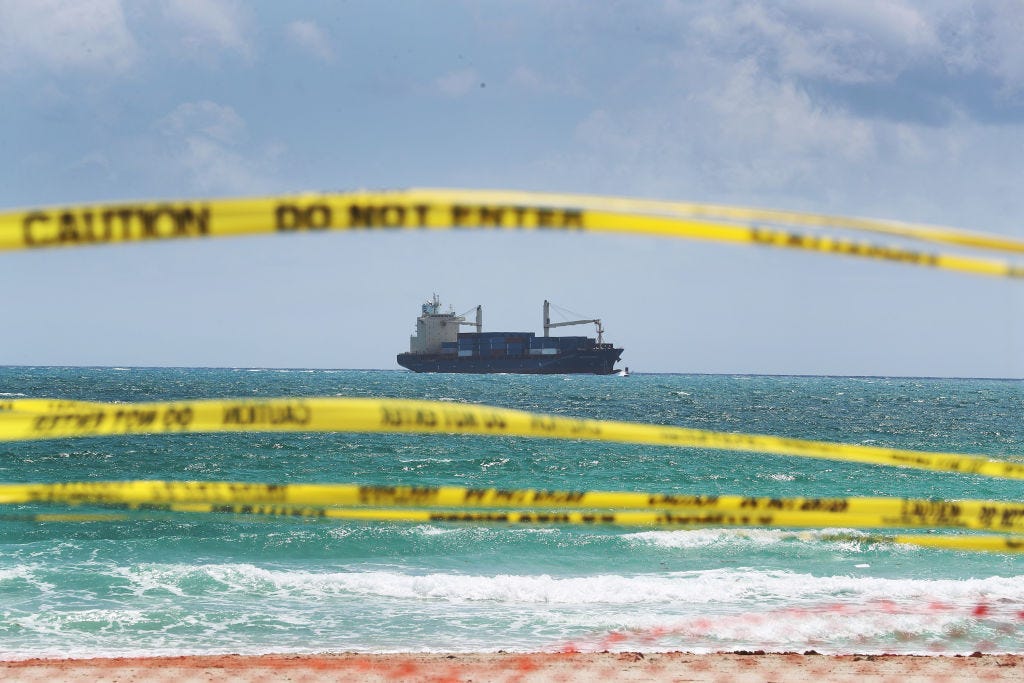 The Friday Five: Thousands of seafarers stuck at sea

Thousands of Seafarers Stranded by Pandemic Plead for Relief [WSJ]

Nearly 15,000 sailors are stranded at sea while their replacement crews are stuck on land without work.

The International Maritime Organization, the United Nations body that regulates global shipping, said Thursday that the inability to rotate crews has emerged as the biggest challenge facing maritime operators, and called on governments to recognize seafarers as essential workers for global supply chains and exempt them from travel barriers. The IMO said it is pushing governments to adopt a 12-step road map to facilitate crew movements and clear the way for a sailor’s travel from home to ship, including flights, as well as return trips.

Sudden airport closures such as the recent action in the Philippines, a country that provides about a quarter of the world’s 1.6 million seafarers, have strained ocean cargo operations from the bulk carriers that transport raw industrial materials to factories to the container ships that handle most of the world’s retail and manufactured goods.

Ocean carriers say they are adjusting work schedules to provide breaks but there is not much else they can do to minimize the hard life at sea.
‍

At Shanghai’s Pudong International Airport lengthy inspection delays are causing shipments to miss flights, forcing consolidators to look for alternate routes. Freight gridlock is so bad that some cargo planes are being forced to leave nearly empty and logistics companies are recommending ocean transportation as a faster option.

China’s new policies surrounding PPE for risk-control has forced freight forwarders to cancel many bookings because export shipments are regularly failing customs inspections. Customers now have to have cargo ready at least four days before a flight, twice as long as the normal requirements. The added manual inspection processes are adding at least three days to transit times. With social distancing, the unloading of trucks is taking longer, and creating lengthy queues and on top of it all, the control office that certifies the medical equipment was closed for Chinese Labor Day, only adding to the bottleneck.

China is the world’s largest source for respirator masks, surgical masks, medical goggles and protective garments, accounting for 50% of global exports in 2018. On May 4, Shanghai-Europe rates were up 313 percent year over year to $10.45 per kg, while Shanghai-North America rates were up 226 percent to $10.55/kg, according to the TAC Index.
‍

Amazon has quietly expanded its “Uber for Trucking” service that matches truck drivers with shippers to 48 US states, as it looks to take a bigger bite out of the booming digital freight brokerage space. Amazon previously only served 5 states and carriers had to be pre-approved to sign up for the service, but those restrictions have also been lifted. The expansion could help Amazon find more truck drivers willing to ship packages between its warehouses across the country. Freight brokerage is an attractive market for new entrants like Amazon as digitization is disrupting the industry, at an accelerated pace.
‍

Valid for sailings commencing on 1 June 2020 onwards and until further notice, Hapag-Lloyd has announced an increase on ocean tariff rate for all cargoes in 20’ and 40’, including high cube and dry containers on the eastbound trade from North Europe to Middle East and Indian Subcontinent.

The German carrier will also implement general rate increase (GRI) in the eastbound trade from East Asia to all US and Canadian destinations as of 15 June 2020 (date of cargo receipt at origin).

China’s exports rose 3.5% from a year ago while imports fell 14.2% in the same period based on the latest set of data released by the General Administration of Customs on Thursday,

Economists polled by Reuters had expected both export and imports to fall 15.7% and 11.2% respectively. The uptick in exports was a nice surprise.

Exports of medical supplies surged in April - which includes 27.8 billion face masks and 130 million protective suits. Experts say this alone could have boosted headline export growth in March and April by as much as 2.7 percentage points from a year ago.

Thanks for reading! Stay safe. Don’t forget to check out last week’s news.  Come back next week for our next Friday Five roundup!

Connect with Slync.io at these upcoming event(s):