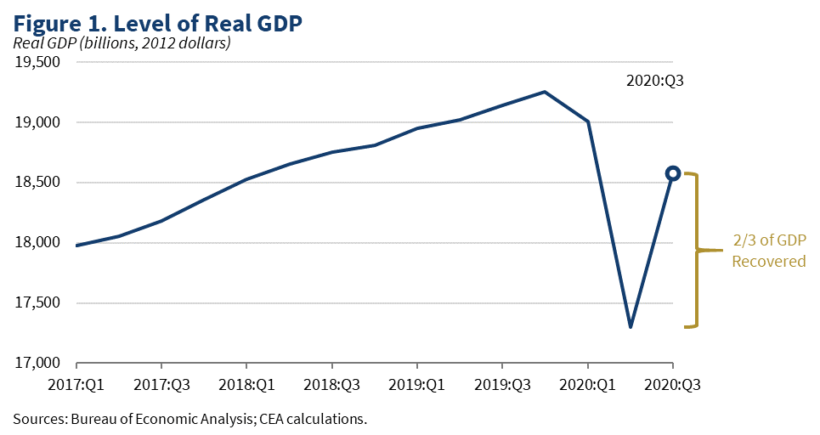 A 33.1% gain in annual gross domestic output left the U.S. economy about 3.5% behind pre-pandemic levels.

The American economy grew at a record pace in the third quarter— increasing its annual gross domestic (GDP) output to 7.4% over Q2 and 33.1% at an annualized rate. That’s the most significant increase in growth since 1947. The third-quarter GDP increase followed a 9% quarter-to-quarter decline in the second quarter, or a 31.4% annualized drop, adjusted for inflation and seasonal fluctuations.

Last week, Initial unemployment claims dropped by 40,000 to 751,000 to the lowest levels since the beginning of the pandemic. It appears layoffs are easing despite a rise in coronavirus infections.

On average, economists expect that the U.S. economy will contract 3.6% this year, measured from the fourth quarter of 2019.

The eurozone economy expanded at a record pace in the 3rd quarter, growing 12.7% over the previous quarter. Q2 saw an 11.8% decline in the three months before June.

Experts warn, however, to expect a dreaded double-dip for Q4 amid signs that the rebound is already stalling.  The eurozone is expected to shrink once again for Q4 after Germany and France, Europe’s two biggest economies, just imposed new restrictions this week to contain a resurgence in coronavirus cases. On Friday, Air France adjusted its forecast down 50%, announcing it would now operate at just 35% of its 2019 capacity.

A double-dip contraction raises the risk of longer-term damage as businesses fail, and jobless workers’ skills degrade. Experts are expecting the eurozone to take until 2023 recover fully.

After coffee bean crops produced unusually exceptional yields, otherwise known as a bumper harvest, Brazilian coffee exporters are struggling to get their surplus of beans shipped off and out of the country. Severe equipment imbalances on eastern South America to Asia trade lanes are to blame.

Coffee exports were up 11% year-on-year to 9,118TEU in July but have not been unable to continue that double-digit due to the container capacity shortage.

Shippers of lower value commodities have been unable to persuade carriers to ship their cargoes, favoring more profitable export cargoes from Asia.

How do you cut delivery times from 10 to 13 days down to 5 to 7 days? Launch your own logistics network.

Today, more blank sailings were announced by Hapag-Lloyd, affecting some East Asia to Latin America West Coast routes. Both AN1 and AN2 services are out of schedule due to typhoons and related heavy port congestion in East Asia and will be impacted.